How Did Soay Get Its Sheep?

N.B. Please excuse the poor justification of many of the images in this post. Blogger has done a thing and won't let me fix them.

Soay, as you may or may not know, is a small island off the coast of the Isle of Skye in Scotland.

It is populated almost exclusively by a feral, and very old breed of sheep, imaginatively named the Soay.

As my dear friend the Goat Lady has pointed out: Soay is a bit of a bitch to get on to. It's surrounded on almost all sides by large sea cliffs and the interior isn't much better. This means the soay is actually very beneficial to the ecology of the island, since they are able to get to ledges that modern domesticated sheep cannot reach, but this very feature makes it not a good place to retrieve your sheep from when you want to milk them, or shear them or harvest some of the lambs. Soay is also not the place where sheep evolved (this was probably somewhere near Mesopotamia. Certainly that's where we think they were first domesticated). So just how- and why- did the sheep get to Soay?

Sheep can swim, but not very well, or very far. Therefore, I am going to go out on a limb and say it is unlikely they swam across from Skye itself. That leaves the possibility that people brought them there in boats. It was the Neolithic at the time, so we're talking small boats, but also small sheep. We've already mentioned how difficult it would be to retrieve your herd from the island, so I suppose that leaves us with two options:

1. The sheep were introduced deliberately, and when the time came to collect them, not all could be retrieved. The remaining few formed a population which has continued down to the present day.

2. The sheep were introduced by accident, perhaps through a mistaken landing or a shipwreck.

The former seems to me to be untestable. We can rely on common sense, and point to the difficulty of landing, the difficulty of collecting the sheep for herd maintenance, and so on. But it's hard to be exactly sure of what was going on. Perhaps someone was willing to risk losing some sheep to the landscape if that meant they could protect the rest from raids. Maybe someone young and foolish thought they knew best, and it turned out they didn't. People do irrational, illogical things all the time, and that's sort of that.

Option two seems rather more interesting. Another friend of mine said they reckoned it wouldn't be a shipwreck, because where on earth would you be sailing to? We can't track the movement of specific populations of sheep in the Neolithic (Well, I can't for you right now. A large scale stable isotope analysis study on caprinae (sheep and goat) bones from the Neolithic would sort it out, but until I a) am a much better scientist and b) get a wacking great grant from the European Union, it ain't going to happen). What we can do is consider other artefacts as a proxy for movement, while bearing in mind that moving small objects like handaxes was much easier than moving animals. 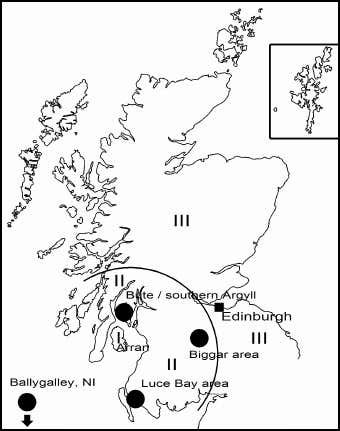 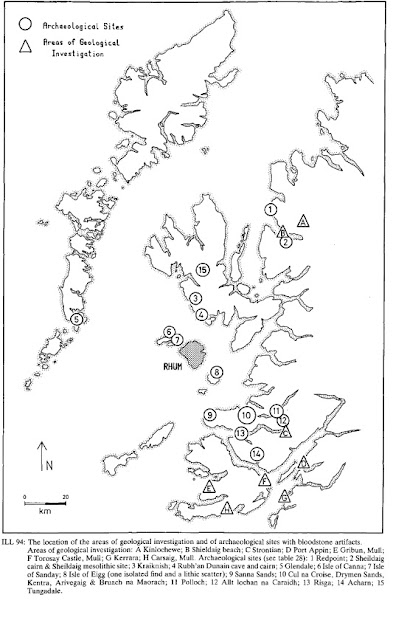 It's reasonably clear, then, that people did move goods across long distances, including sea distances, during the Neolithic. A consequent movement of people, their livelihoods, ideas and goods is not unexpected. Since we know that sheep had to be transported to Britain somehow- and indeed, across Europe- it is not unreasonable to assume that they too may have been traded, raided, given as kin-gifts, or part of pretty much any other mechanism of exchange you can think of. Given the clear sea connections existing between the islands, and given the fact that sheep must have been transported by sea at some point, it seems not at all unreasonable to me that they might have been the victims of a shipwreck, on soay.

All we've done here is establish the possible of course. One would need stable isotope analysis of the oldest bones on  the island for that, and it may well still not give us the definitive answer. Archaeology's a bit of a bitch like that.

I've just finished reading R.G. Collingwood's general book on Roman Britain from 1924. As you might expect, it is by turns laughably out of date, horribly racist, and then weirdly prescient of stuff we thought we came up with in the 1990s. This has been my experience of reading almost any academic work from before 1940. At this point, he has been describing the development of Romano-British art forms, and states that this kind of art hybridisation happened all over the empire, which apparently was unpopular with at least one of his colleagues:

"Anyone who wishes to convince himself of its [the idea that hybridisation did not happen] falsehood as applied to the Empire in general need only examine photographs of a representative series of provincial sculptures, that is, if he has an eye for sculpture, which perhaps some historians have npt"