Popular Media and Gay People in the Past

So last week I saw The Lion in Winter (1968) for the first time. It was ace, I fully recommend you check it out.

Spoiler: The Lion in Winter (in 1968!) contains a scene which discusses the sexual history of the (characters of) Richard the Lionheart and King Philippe of France. With each other.

Once I picked my jaw up off the floor (1968!) I started wondering. Is there any historical basis for that? Are we looking at an Edward II situation or did this entirely come from the playwright's imagination? So, I did what any self-respecting PhD student would do. I googled "Richard the lionheart gay" and here's what I got: 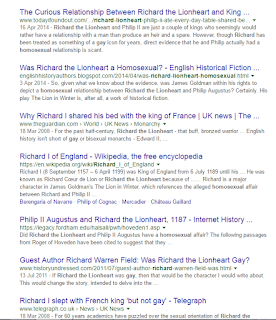 The next link, just off the page, is from Gay Heroes "Richard the Lionhearted" [sic].

It's not my intention here to discuss whether Richard was gay, but rather to discuss responses to the assertion the he was, or wasn't, gay in popular media like these blogs and newspapers. He's an example, not the subject. My critique, as far as I'm aware, transferable to modern queer scholarship in history. They're probably way way way ahead of me, and that's fine. I address only popular media and popular historical imagination with this post.

So, background. Looking for gay people (or same-sex attraction) in the past is a tricky thing. All the sources we deal with are almost entirely hostile (for the history of Western Europe, that is). Western Europe was, seemingly, a pretty homophobic place. To find our evidence, we're often looking at court cases (See, for instance, chapter 1 in Sodomy and the Pirate Tradition by B.R. Burg, which is based entirely on 17th century court records); or defamations (e.g. almost everything Tacitus had to say about Nero); or inferences (Contemporary writer Roger de Hoveden says of Richard and Philippe "and at night their beds did not separate them"). We extrapolate, as people have done from Richard's lack of children with his lawful wife, or this Roger de Hoveden passage. It's necessary for us to do this because no-one would have written down "The king was homosexual", even had they mentally framed it that way.

Unfortunately, like all history, we can look at this through a variety of lenses. If you're looking for gay people in the past, you might say all this is very convincing and attempts to explain them away are merely homophobic. But others might argue the evidence is cherry picked: sodomy was often added to a long list of other charges, especially where divorce was concerned. Tacitus is literally trying to smear Nero, we can kind of assume he'd exaggerate things (or hope so... otherwise some really horrible things were done to unfortunate bystanders). And this Roger de Hoveden statement? The full passage reads:

Richard, [then] duke of Aquitaine, the son of the king of England, remained with Philippe, the King of France, who so honoured him for so long that they ate every day at the same table and from the same dish, and at night their beds did not separate them. And the king of France loved him as his own soul; and they loved each other so much that the king of England was absolutely astonished and the passionate love between them and marvelled at it.
(Please note that this is a translation and the original does not necessarily preserve the difference between "bed" and "bedchamber").

To the "objective" (and here read "straight and/or not interested in same-sex attraction in the past or the present") writer, it's obvious that queer commentators are reaching, and reaching a lot, in order to make these judgements. They point out that much of the evidence is circumstantial or inferential. They say, correctly, that cultural context is really, really important. Kings on the move in the 12th century didn't take that much with them; servants often slept on the king's floor. Maybe Richard literally had no other bed to put Philippe in, and so shared his own in a diplomatic gesture. This isn't too farfetched, after all. To those observers, we're the ones putting our "gay agenda" onto the past by insisting Richard was gay because he had no children with his wife (and actual argument that has been made).

The sad part is... they're not entirely wrong. Writing queer history is a political act. Queering the past is a political act. We can't, and shouldn't forget that. But the uncomfortable thing, and this is a bit unpopular, as opinions about sexuality go, I don't think homosexuality has always existed. By that I mean, the concept of a person who only and always experiences attraction towards someone of the same gender, has probably not always existed. After all, our concepts of gender are actually very fluid when we really look at them, historically, so it seem ludicrous to assume that sexuality would be fixed as concepts. This is not to say that there were no individuals who only experienced same-sex attraction, merely that they weren't perceived as a category. The binary (and obviously incorrect, and yet seeming impenetrable) conception of gay/straight is totally inapplicable to the past. If you're bi and you read any of those links, I imagine you're tearing your hair out. I know I was.
Let's look at two of the academic arguments made about Richard's sexuality:

John Harvey, 1948, was the first author to suggest Richard was gay, citing his late marriage, their lack of children, the confession of sins which may have included sodomy (it's unclear whether Sodom had acquired its association with gay male sex by this time), and the fact that he was rebuked by the papacy for not sleeping with his wife.

John Gillingham, 1999, pointed out that Richard was busy, like crusading and stuff, so maybe that's why he was too busy to have children with his wife. He had at least one illegitimate child, and maybe just didn't like his wife that much. Political marriages were often unhappy. Also, possibly she was infertile.

Like... seriously? We're seriously trying to deduce a person's sexuality (in modern terms) based on whether or not they liked their wife?! Is this either here or there when considering whether a person experienced or acted on same-sex attraction? This is the kind of category error I'm thinking of, when I say the modern idea of gay vs straight is inapplicable. You can't argue someone never had sex with someone of the same gender just because they had children.

It seems obvious to me, and every queer scholar I've ever spoken to, that same-sex attraction has always existed but that the ways in which it is codified have not. It's time popular media caught up.

Or is it? Is there value in the political labelling of a historical person as gay? It is more important that we, the not-straight people of the world, are perceived to have a history, which at present is reflected most strongly through the lens of GAY? Am I making the history of queer people less visible with my insistence on nuance? Answers on the back of a postcard
Posted by Caitlin at 6:04 pm

Email ThisBlogThis!Share to TwitterShare to FacebookShare to Pinterest
Labels: gay, homosexuality, queer history, Richard the Lionheart, The Lion in Winter (1968)